We Came In Peace 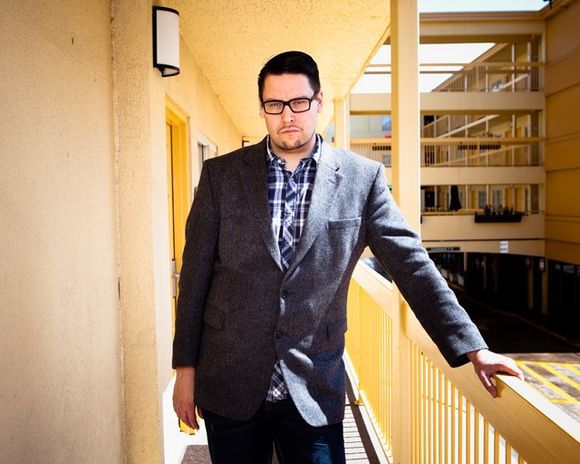 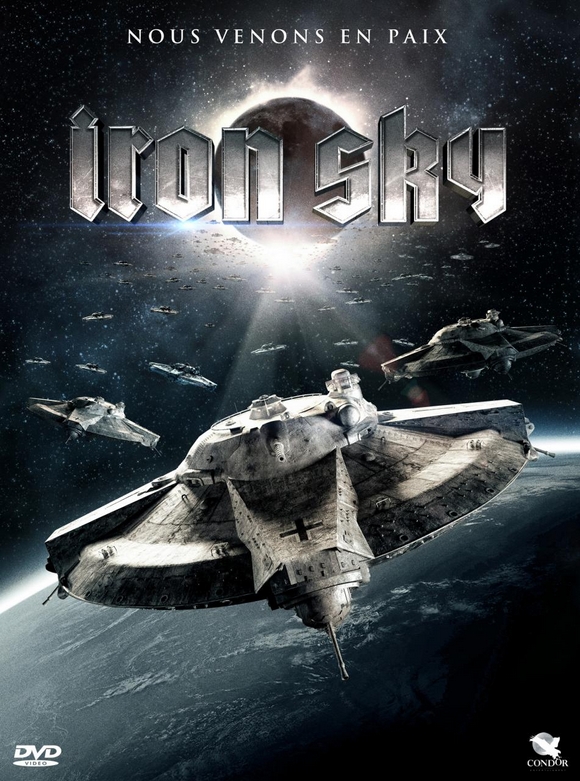 Iron Sky is out since 9 months now. Was it worth it ?
Money-, work-, futurewise it definitely was. There’s lot to be said about the effect relationshipwise, though 🙂 Traveling the world with the film for 6 months in a row does wonders to your lovelife.

A lot of people dug your film but some people also think the idea was cool but badly exploited, in result, the movie seems too politically correct, the dialectic too simplistic (goverments are bad) and most of the jokes lie on the black hero. Do you take in consideration every critics that are made about your movie ? Do you plan an Iron Sky 2 ?
Thank you for posting a real question! The critique for Iron Sky has swindled off to both sides very strongly, and this was something we knew from the moment we started to do a film about a controversial topic and with a rather atypical way. The reception of Iron Sky has been highly polarised, some feel it’s the best film made in a decade, others that it’s the worst, and there’s no better and more fantastic result one could get on a film of this style. It is made to entertain and to bring up controversies, which always leads to polarised reception. Regarding the hero of the film, it’s not the black guy (Washington), who’s rather a catalyst, but the female Nazi teacher Renate. It’s her story, and she is the person who goes through the biggest and most radical change through the film. A Nazi who becomes a hippie.

Finally, the movie wasn’t properly released in France but just got a DVD premiere. It seems Synergy Cinema didn’t do his job. Are you a bit dissapointed about that ?
The reason it didn’t go to theaters was that it was a late release of the film, the film has been already out on theaters in over 60 countries, theatrical release in France wouldn’t make too much sense this late in the game for an fan/event film of this type. There’s still big DVD market out for it, but yes, I would’ve hoped to see the film in cinemas in France as well.

You traveled a lot to introduce your movie. Tell me what country enjoyed it the most.
It’s hard to determine which country has been strongest with reactions, definitely during Berlin Film Festival, Oslo was amazing as well, so was South by Southwest in Texas, US, but if I was to pick one, the Brussels International Fantastic Film Festival was the best; a hall full of geeks cheering and applauding all through the movie. We were awarded with Méliés prize and the audience award afterwards, so we were really happy with that specific screening. It’s of course hard to determine which country has been most receptive, because I’ve only been present at special events and film festivals, not at « typical » screenings, so country-wise I would say the one with most admissions (Germany) would be the right answer.

I saw you plan to adapt a cartoon for a new movie: I killed Adolf Hitler. Can we call you a nazi-obsessed ?
My friend, you can call me what you like. I tend to call myself filmmaker, but if you feel the need to call me something else, go right ahead. 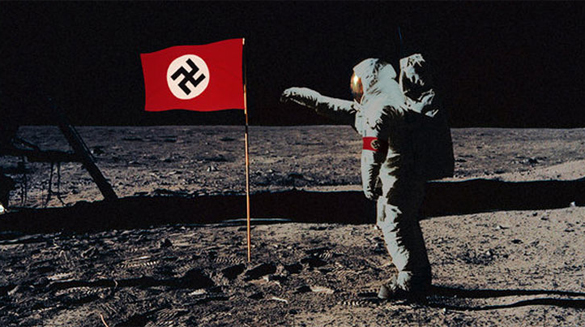 What are your other projects ? Did you receive a lot of screenplays, stories or work invitations since the release of Iron Sky ?
Yes, I’ve had a big bunch of offers from Hollywood and other areas for the next projects, and I’m working right now on two main productions – one is to become a studio film, other is a UK-Germany co-prod (the I Killed Adolf Hitler), both which I chose because they are clever and well-written science fiction stories. The US production is rather a scifi action film, the UK-German co-prod is a time travel story.

What did you think of Prometheus ? What was the last film that impressed you ?
Last film I was really impressed with was actually Prometheus, although it has received a lot of critique, I appraised it of its’ filmmaking values, and although I do acknowledge some script issues it has, I was thrilled by the story. But science fiction – and by scifi I mean real scifi, not Battleships and Transformerses, which are sort-of-scifi but not what I enjoy with the genre – has suffered a blow in the last years, and I hope we have more filmmakers such as Duncan Jones (Moon, Source Code) to really push scifi back to its’ feet. I hope to be one of them.

Would you have chose to make movies if Internet didn’t exist ?
I started making movies in 1995, when – although internet did exist – the Internet was not there that actively. I would rather say that had I not had the access to Internet, I wouldn’t have been able to make my first breakthrough film (Star Wreck), and would still be struggling getting my first film financed.

You did not attend any film school. Do you see it as an advantage or an inconvenient now ?
I respect film schools, but I was never much a school-goer, I’ve always learned by doing. When the situation came where I could’ve gone to film school, we decided to rather spend the time (7 years) to do our first feature film (Star Wreck), during which we were forced to learn all the aspects of filmmaking through mistakes. I think the fact that i have always had to squeeze the budget, have not learned to do films the most convenient way, and have been bootstrapping all my career is an advantage now, especially when talking to Hollywood, which is right now searching for directors who can do 100 million dollar -looking films with 10 million.

Do you think filmmakers must take a political stance nowadays ? I refer to the criticism of trivialization of nazism some journalists have made out of Iron Sky.
No, I don’t think it’s a necessity, but if you do a film about Nazis, you better have a message to carry along with it. By heart, Iron Sky is not made to preach, but it does have a message which I think is important. We live in the world not very much unlike the one in the 30s, and we have to be careful on the rhetorics our leaders are spitting on us. 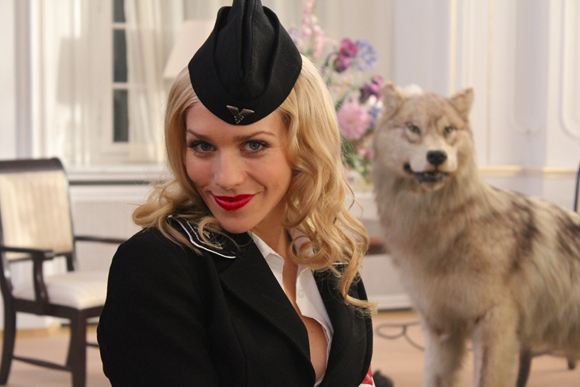 Can we laugh about everything ? I read Julia Dietze asked some of their jewish friends if she should accept the role of Renate Richter.
Yes, we have to be able to laugh everything, especially when it comes to fear, we have to laugh directly into the face of fear to conquer it. And that’s what Nazis operated on – fear. Laughing directly in the face of their ridiculous and destructive ideology we sweep the rug underneath it and reveal that it’s just a feeble attempt of power-hungry people to cement their position in power.

Do you perceive right-wing extremism a real menace in Finland, and more generally in north of Europe ? Do you think some extremists liked your movie ?
Right-wing extremists got a big win in Finland, and I’ve been following European politics, and because of the financial crisis, the right-wing movement is growing stronger, but I’m also happy to find out that this time the more liberal part is not going to give up the fight easy, and racist, xenophobic, homophobic and anti-semitistic thoughts face a huge opposition from the people.
Regarding right-wing extremists, we’ve had some death threats from them, and a lot of disappointed messages on your YouTube when they find out that we are mocking the Nazis. So no, they really don’t like us.

Are you, or were you politically commited at a time of your life ?
Not that much. I’m a member of the Green party, but not active in politics, but have been asked to run for the parliament, but didn’t feel like it’s something I’d like to be my best at.

How did the collaboration with Laibach happened ? Was it pleasant to work with them ?
We both share similar kind of sense of satire, and the match with Laibach was very clear from the beginning. We presented the project to them and they felt it was their cup of tea (with a swatika on the side). Out of all the people I collaborated with Iron Sky, and that was probably thousands, Laibach was the most enjoyable collaboration. They are devoted, pedantic, not afraid of impossible tasks and amazing musicians in all the fields of music. 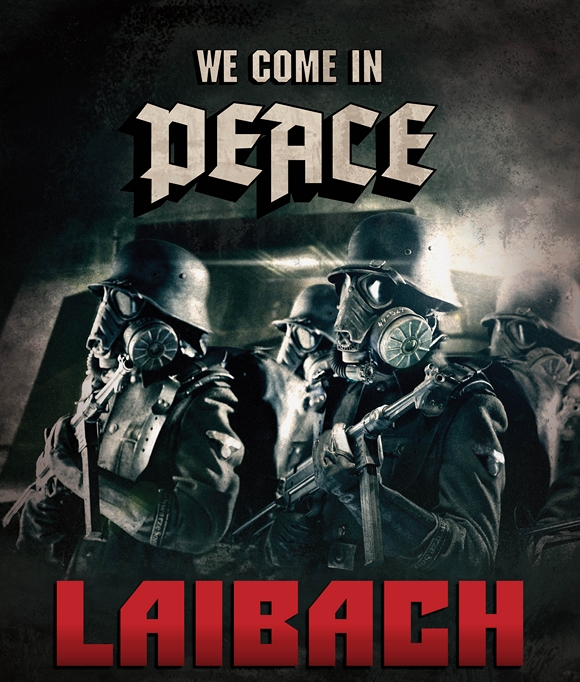 Before making movies you were in a black metal band, does Älymystö still exist ? Do you plan to put black metal in the soundtracks of your next movies ?
Rather an avant-garde black metal industrial noise group, and it does exist, although it’s quite silent on that front, and yes, why not, if an appropriate scene would present itself, bringing black metal to a film is definitely possible.

Did you know Iron Sky was also the name for an american video surveillance system ? ‘Better tools to fight crime’
We didn’t know it, and it didn’t actually exits when we started to create Iron Sky brand, but came along a bit later. Our paths haven’t crossed so far, although I’ve been toying to suggest them a collaboration marketing campaign.

Do you see crowdfunding as a solution to illegal downloading and the new way to give back creativity to culture ?
I don’t think they are directly related, but I believe that crowdfunding promotes a more internet-minded thinking when it comes to filmmaking, thus getting respect from more « jaded » Internet-users towards buying the product instead of directly pirating it.

What are your bedside books ?
Right now, I’m reading the Bible (as a research material for a future project), and Game of Thrones (first book).