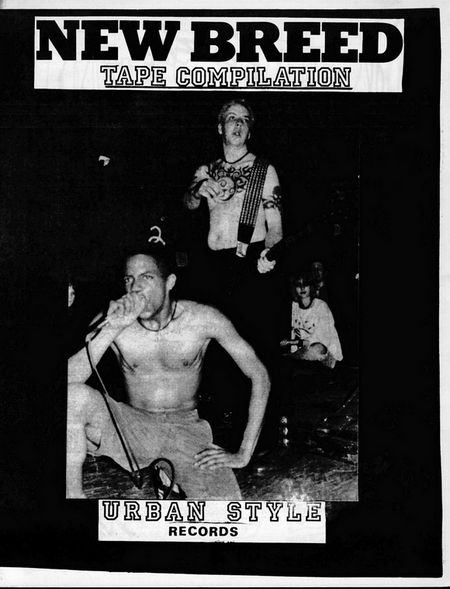 Who were « The Doty Avenue Dirtbags », the first gang we find in your book ?

That was a nickname we had for kids from a different street in our neighborhood. We called them dirtbags because they always seemed to have dirt on their faces and they were generally nasty characters. They liked to curse and throw rocks at any outsiders passing through their street. It was there that I heard live music for the first time. A band in a garage was playing heavy metal and I was mesmerized by the power of the sound.
I like that piece because it embodies the approach of the whole book—to focus on small moments and details and bring them to life. It’s a book about hard music, like metal, punk, and hardcore, but it has a poetic approach, and I think that makes it unique. It’s not a historical account of the music, but a personal account. That was important to me. Anyone can do interviews and publish the answers. I wanted to tell stories that were unique to me. I wanted to write the book only I could write.

You said « Intimacy is crucial » in the hardcore scene. The word seems outdated today.

I meant that hardcore shows are best suited for small venues, where the energy can fill the room and make the room feel like it’s going to explode. Most importantly, intimacy is crucial so that the band and the crowd can have close contact with each other. A hardcore show in an arena, for example, would be absurd.
In that piece I talk about seeing Adrenalin O.D. at CBGB’s. The bass player punched someone in the crowd. I was only 15 when I saw that and I was pretty amazed by that kind of atmosphere. Just the year before I had seen my first concert ever, Iron Maiden, where the people in the front row were still pretty far away from the band. I was very impressed by the difference. So intimacy is crucial because hardcore music, I think, is meant to exist on a small scale. It’s meant to be “underground.” 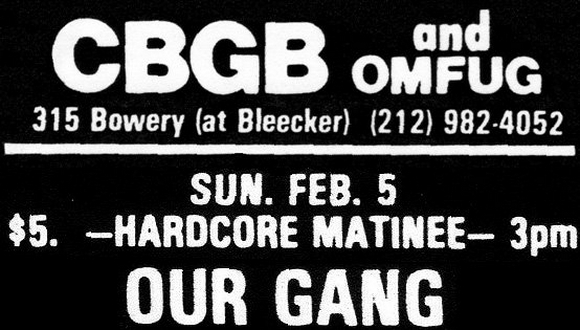 “Hardcore scene » is not your business anymore, right ?

It’s true I don’t feel connected with the hardcore music of today. Most bands don’t play fast anymore, and I think speed is the defining characteristic of hardcore. Most bands sound extremely metal. I would rather listen to actual metal than metal that passes itself off as hardcore by adopting a certain image.

That’s what I’m talking about ! Pop music has adopted the image of hardcore, just as bands that sound totally metal pass themselves off as hardcore by adopting the image.

Yes, it was. Maybe because neighboring businesses started to complain about the large number of people clogging up the street outside the club, it was decided that people would have to wait on line. Maybe you could argue that the matinees were getting too popular. Too many new people were coming to shows who didn’t truly understand hardcore, and the violence they brought with them was the reason CBGB’s stopped putting on matinees.
Before the police line, people would hang around outside the club and talk to each other. It was a community. But once people were made to wait on line, it felt like you were at just any other club. Get in line, pay your money, follow the rules, etc. It seemed to contradict the essence of a hardcore show. 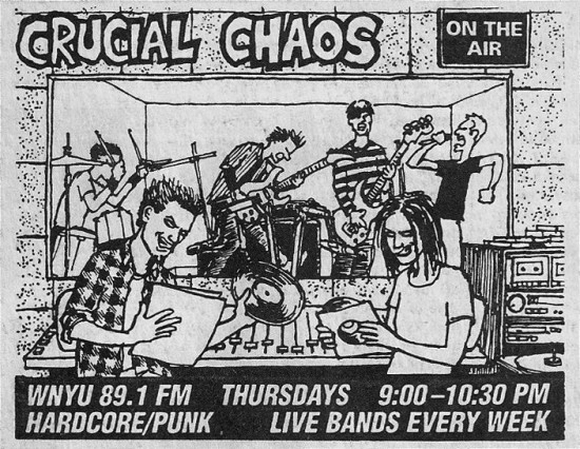 Crucial Chaos was really determinant in the second wave of NYHC. How did you discover it ? It seems this radio program was a prerequisite for all the scene.

I don’t remember exactly how I discovered it, but it was exciting to hear all the local bands play on the radio and do interviews. I had the sense that I was experiencing something special—great music being made independently by people in my own city. That radio show was definitely a big part of the hardcore scene during that time. If I knew a band like Warzone was going to be playing live on the radio, I had to tape it! I wanted to be able to listen to it again later on, to be able to enjoy it again. You never really heard good music on the radio. It was all popular music, nothing underground, nothing outside the mainstream, especially hardcore. So to hear Underdog on the radio, or Token Entry, Krakdown, etc, was very exciting.

Is it true you got ALL of the broadcasts on tape ? People rediscovered it when you put it online or people asked you about before ?

No, I didn’t get them all. I got a lot though. In 2003 I put them online and they spread quickly. They had not been available before then. Not many people, for example, had heard the interview with Straight Ahead. People loved that band and suddenly they had this piece of the band’s history available to them. It feeds into the excitement that people feel toward this music. It keeps the music alive. For that reason I’m glad I had the good sense to record all that stuff back then. As I mentioned before, I taped these bands just so I could listen to the tapes again myself, for pleasure, but I shared them online as a way of preserving them for a long time. The more people that have them, the less likely they are to disappear. They become part of the history of the music that is always available for people to discover.

« Hardcore music rejects the idea that the band is superior ». You make an exception for The Bad Brains.

Yes. I did that because they are generally considered one of the greatest bands of all time. Hardcore was appealing because it seemed like anyone could learn to play an instrument and start a band, but you were out of your mind if you thought you could ever sound like the Bad Brains. Their talent was phenomenal. There’s a magic there that you can aspire to all your life and never come close to reaching, but to them it was natural. 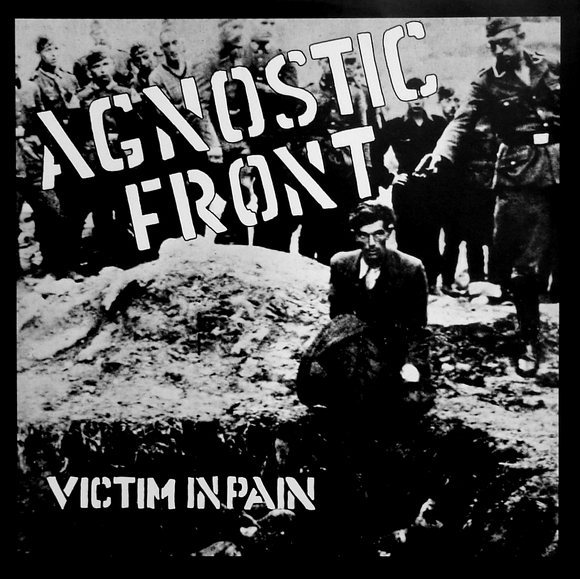 About the AF’s « Victim in Pain » record released in 1984, you say in the book this was « the realest thing » you ever seen. The cover is still shocking today ! Is this the ultimate NYHC record ?

Yes, it is the best New York Hardcore record of all time. All the bands after it adopted its sound and themes. The sound was a mix of fast parts and slow (mosh) parts and the themes were of unity and being an outcast from society. For me, that record is what hardcore is supposed to sound like. So when I hear a new band and their mosh parts sound like Pantera, it doesn’t work for me.
The cover was a throwback to punk rock because it was intended to shock the viewer, and it did that very well. It made you think. It drew you in. Good or bad, it got your attention.

We know Peter Steele from Carnivore/Type O Negative later wrote songs and music for AF, included the controversial « Public assistance ». Do you remember how this was perceived by the rest of the scene ?

I don’t have any specific memories around that. Agnostic Front were already legends at that point. I think the only person who got worked up about that song was Phil Donahue. I think the people who really knew AF and loved them knew a song like that wasn’t the essence of what they were about. Their essence was captured in songs like “United & Strong” and “Fascist Attitudes.”

Crossover was born (and draws the attention again with the book « Louder Than Hell« ). Anthrax named their band NYHC. Was it a shitty period ? Or a musical effervescency ?

Crossover was great. I still love the stuff C.O.C. and D.R.I. did at that time, along with bands like Agnostic Front, Ludichrist, Crumbsuckers, Leeway, etc. Everyone was very upset at the time that hardcore was incorporating metal influences. That seems funny now. Hardcore sounds much more metal now than it did then. The biggest downfall about modern hardcore is that the whole tough guy approach has become a given. Hardcore is not about having tattoos and making mean faces. It’s often about being a total weirdo. It’s about NOT fitting in, being different, doing what you want regardless of what anyone else thinks. I think hardcore has lost a lot of that. 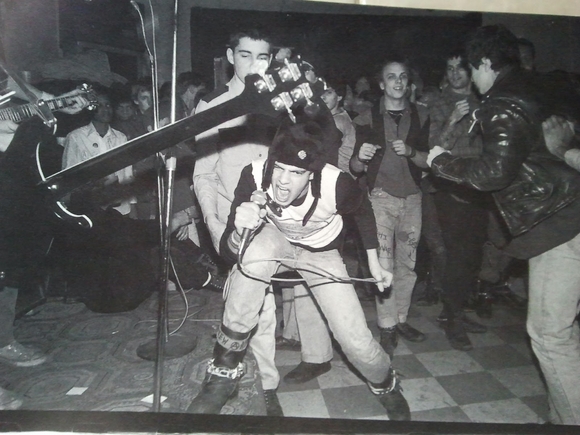 You talk a bit about Dave Insurgent from Reagan Youth. RY seemed to be apart from the scene. Dave’s life been a real tragedy.

Reagan Youth were definitely apart. They were much more punk than many of the other hardcore bands. They were in your face with their political messages. They were not afraid to be shocking. For example, they put a Ku Klux Klan member on the cover of their first record. Their songs had strong ideas. Dave had substance. He was intelligent and creative and charismatic. As Raybeez from Warzone said in the book American Hardcore, Dave Insurgent “knew what was going on—he was a true punk.” 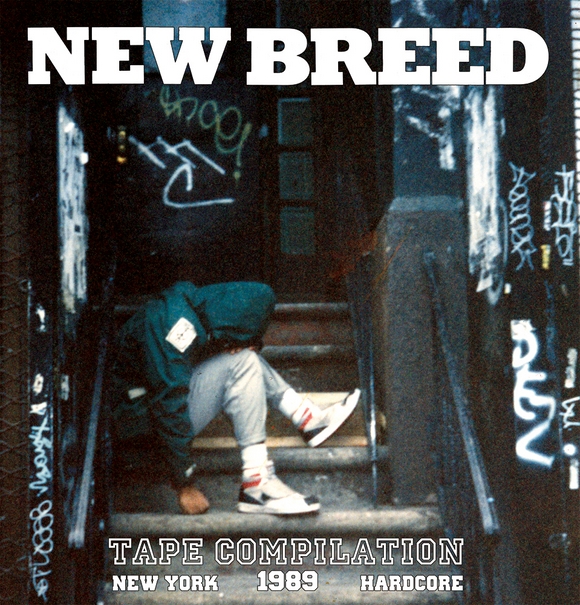 Then you formed OUR GANG. Was it hard to distance your band from all the other ones born in this era ?

Not at all, because we just did what we wanted without worrying about anything else. We played faster than most bands at the time, and that set us apart. NYC Mayhem, the band that became Straight Ahead, was a big influence on us. We were influenced by the early ‘80s hardcore bands. We wanted more of a punk influence than metal. We wanted to play fast while most of the other new bands wanted to sound heavy.

There’s a funny passage at the end of the book when you tell your short experience with Side By Side ! It’s revealing of the Youth Crew scene, that was a lot of pose ! Do you still meet guys of that era ?

Another funny moment is when your family listens to the Our Gang discography. 30 cruel minutes !

It was excruciating! Imagine my aunt and uncle sitting there listening to the record. They had never heard hardcore before. They were probably so confused. Fast, noisy music with screaming vocals. It probably didn’t even sound like music to them. They were probably thinking, why would anyone ever put this on a record???

How can we go from NYHC to teaching, it’s not very common.

I took creative writing classes in college and developed a passion for it. I won some awards and graduated with honors and the following year, at the age of 24, I found myself in front of the classroom, a teacher! Very surreal. I think you’re right. It’s not very common, but it shouldn’t be much of a surprise. Hardcore music encourages original thought. At least that’s what it’s meant to do. That’s what it did in the beginning.