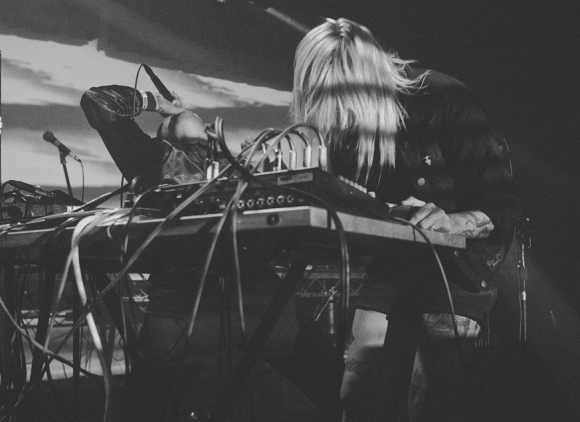 Who is Youth Code ? Tell me how it started.
S: youth code is Sara Taylor and Ryan George. Two people in love who make industrial music. We started this band on a whim because there was an artist showcase for all employees of where I work ( vacation vinyl in silverlake, ca) I wasn’t contributing so I said we had a band. We haven’t stopped since then.
R: I’ve been writing electronic music for years but never really did anything with it. Sara thought we should do a band together and booked a show. I was almost forced to come up with what became Youth Code. I’m glad she pushed me to do it. It’s something that allows us to travel together and gives us a hobby to share. Also, YC always keeps me interested because of the technology. It’s exciting and gives a lot of room for experimentation. I’ve been around guitars and drums my whole life. With synthesizers, I find new sounds every time I sit down with them. It keeps me inspired. YC is just the band that we wanted to hear and what we felt was missing from the underground music world.

I discovered your band on Noisey. Some cronyism involved ? Haha.
S: No?
R: No. Do you think we don’t deserve attention? We are fortunate enough to be on one of the best labels currently in existence (DAIS RECORDS) and have covered a lot of ground in the short time we’ve been a band. We played several shows in LA, SF and flew out to play NYC in the first couple months of us starting. All off of a demo tape. Put out a 7″ on Angry Love Productions and then toured the U.S. when our LP came out. We make it a point to play shows with all kinds of bands far beyond our comfort level. Believe it or not, hard work pays off.

Ryan, you used to play in hardcore band Carry On. I had a theory about the fact a lot of ancient hardcore dudes are now doing «industrial» music…
S: I don’t think 90’s- early 00’s hardcore is « ancient » by any means. Who else does industrial?  the first Ray + Porcell tape with a drum machine?
R: I don’t know anyone from hardcore that does industrial music. I think Jesse from Hoax is trying to start something… but I guess you know something I don’t. I know a few people that are doing synth pop/indy rock stuff that came from HC. But not ebm or Industrial.

Your album is one of the most brutal electronic stuff I heard this year. It’s not easy to make EBM sound good today without falling into gothic abyss or cyber shitty electronics. Any recipe tip ?
S: I think it’s just looking towards what influences us. We like punk and hardcore, and also we like early wax trax era industrial – when it was brutal…. so naturally liking that stuff helped us shape our sound.
R: We couldn’t do anything other than what we do. I know Sara has a little soft spot for some of the more cyber club type music but when we get together to write, we just try to write as rough as we can with the limited gear we have. I think most ebm type bands are lazy and rely on computers too much, which sadly, can suck the life out of what could’ve possibly been a great song. Of course, there are a few exceptions but it’s baffling to me why they wouldn’t just get an mpc and a couple keyboards instead. It sounds so much better and the limitations of hardware force you to think outside the box.
We also listen to a lot of power electronics and tho we aren’t a PE band, I think that rawness tends to seep through a little. The better we get at playing together, it’s just going to get more aggressive and structured.

Who’s still listening to Skinny Puppy & Front Line assembly today ?
S: I think a lot of people listen to FLA and skinny puppy. They both just released new records that did pretty well, and SP is going on a massive US tour.
R: Honestly, it’s mostly older people that are still listening to FLA and Puppy type bands. We hope that we can get younger people into some of the older bands through what we do. I think the genre has been greatly overlooked and has a lot of potential left to explore.

What kind of audience do you have in the U.S. ?
S: We have a varied audience of kids from Cyber Goth Rivet Heads to Hardcore Kids. I think since we don’t just fit into one place neither do our fans.
R: Like Sara said, our audience is very diverse.

Do you listen to non-aggressive music ?
S: I listen to all sorts of music. I really love dancing around the house to Robyn. It would be dumb to be all tuff all the time. Life is about variety.
R: Of course. We listen to so much different music.

What are you dealing with in your lyrics ?
S: Issues of change, frustration… normal everyday life stuff.
R: The human condition. Love and loss.

Am I wrong if I say there’s a runic inspiration in your design ?
S: It’s not really runic at all. I was inspired by the way Chris Conn draws daggers, so I changed the handle of the dagger to a Y and then put a C underneath it.
R: Sara does all the artwork. We’re not interested in using runes in our art.

What are you interested in, what are your main concerns ?
S: My main concerns are having a happy and fulfilled life. The issues of the world are always things to read up on, but I mainly focus on what’s going on in our home. Is our dog ok, how can we further our creativity, what’s next on our agenda. These are the things that concern me everyday.
R: On the rare occasion that I write lyrics, politics are there. But I break them down to something smaller and slightly hidden. The well being of my loved ones are my main concern and trying to be the best human I can be.Think globally and act locally, or however the saying goes.

Is life in L.A. boring ?
S: Life in LA is anything but boring. I lived in London for a while, It was awesome – but I don’t like being too far away from my family ( who are all in LA).
R: Los Angeles is the best city on the planet. What most people think of LA is a very small population of the city that the media tends to focus on. I’m constantly inspired by the people in our community.

Anything to add ?
S: Nope! Thanks for this interview opportunity though!
R: Thank you. 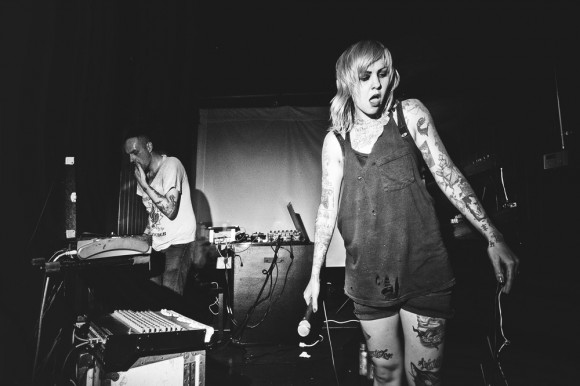